By July 2013, concrete panels were being hung along both sides of the repaired section of the Pier, though rough weather has slowed this work. When completed, these panels will make a major contribution to the safety of the harbour waters. The state government has allocated up to $15 million to finish the repairs to the Pier in this year’s (2012-13) budget.
It appears the repaired wall of the pier is working! Following 4 days of northerly and north-west winds blowing onto the pier in the first week of July 2013, much of the harbour water is relatively calm. One yacht is still on the swing moorings; the 4 commercial boats are all tucked into the corner next to the pier, and every time a wave hits the new pier, there is a reassuring clunk! Waves are still pouring through the gap between the repaired middle section and the old seaward end (still to be repaired), and waves are still breaking over the landward end, but obviously, the harbour is a safer place. Fishing charter boats moored to the main jetty are also merely bobbing up and down. 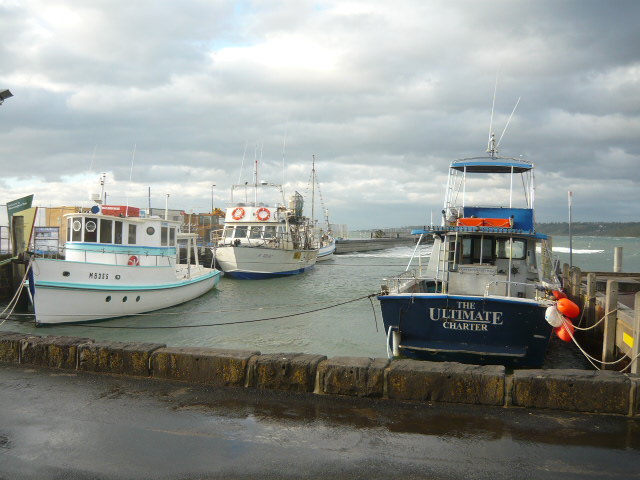 Commercial boats
Repairs to the seaward end of the pier are still awaited – engineering tests are complete and Parks Victoria have stated that tenders are due to be called. Again, this work, funded by the State government, is overdue.