This group is the largest working along the Mornington Foreshore and has operated under various grants from Coastcare, the Federal Government and the Shire. Originally, this Group worked on the Beleura Hill track to the beach, which has steep rocky cliffs above and below the track. Wire protection up some of the cliffs protected salt-tolerant plants. As well, the Shire spent thousands of dollars in re-building paths, changing drainage flows down the cliff, and building wooden bridges and walkways.
Work to improve the banksia woodland along Mills Beach – on the foredune and behind the boatsheds commenced in 2007 and has continued ever since. Contractors sprayed and cut and hand weeded the numerous weeds, creepers and grasses. Mirror bush and pittosporum trees have been major challenges. No decision has yet been made as to whether or not the non-indigenous pine trees, Norfolk Island pines and occasional cypress trees – all large and all probably providing some habitat, should be removed (at high cost). Rubbish dumping of large items has also been a problem. A large pile of bones was unearthed, raising fears of human remains, but these turned out to be those of a large cow. We have no idea how this got behind the boatsheds.
Closer to the Life Saving Clubhouse, extensive spraying of introduced grasses had prevented some plantings from growing faster. Also, in a marked “Restoration Area” removal of bamboo stakes by students and younger children have spoilt an experiment into which type of spraying was most efficient on certain weedy grasses.
Plantings behind the Clubhouse and around the slope to the car park have survived difficult, salty conditions and creepers and low level shrubs now cover much of the slopes.
In 2013, work on restoration of indigenous (i.e. local) vegetation on Red Bluff at the southern end of Mills Beach commenced with large grants from both Coastcare and the Commonwealth Community Grants. Chopping up major tree weeds, then mulching, and spraying (especially of bridal creeper) has allowed plantings by the Working Bees and these are staked, shielded and sometimes, have felt mats preventing weed re-growth. Several areas have remnant grasses and shrubs and these are gradually being hand-weeded, and will have grass seeds scattered over the later in 2013. Nest boxes have been installed on the Bluff and along the foreshore and it is hoped these will be colonised by bats, gliders and small parrots during 2013.

Working bees: are held every third Sunday morning at 9.30 am on or around Mills Beach and Red Bluff. The red MEA flag marks where the workers are. As with other working bees, morning tea, tools and gloves are provided. Children are welcome so long as they are accompanied by a parent and are over 5 years old and wearing appropriate shoes. Contact Brian Burrow – 0467 489 810 or morningtonea@gmail.com 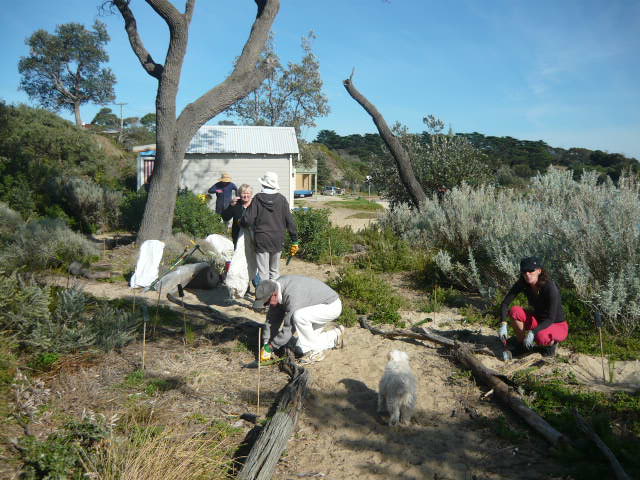 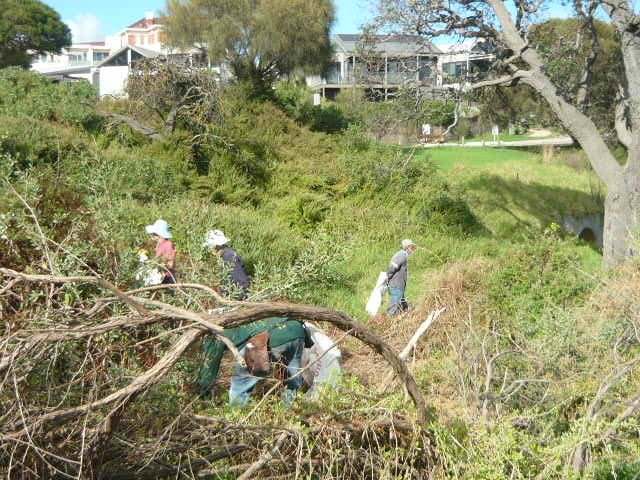