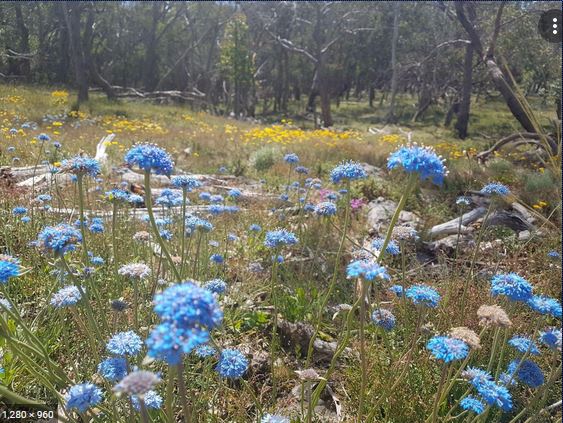 The Blue Pincushion is an attractive flowering herb which is widespread throughout Australia except on the tropical north coast. It grows in open forest and heathland and will tolerate many soils and aspects. It flowers in late spring and can be seen in many parts of the Mornington Peninsula. If you take the walk from Seawinds to Waterfall Gully you will see it growing beside the track. It is unusual in that it is the only species in the genus and family. It was first described scientifically by Robert Brown, the Scottish botanist who came into Port Phillip Bay with Matthew Flinders in January 1804 and climbed Arthur’s Seat. It likes moist well-drained soil. Often short-lived in cultivation, it makes an excellent container plant. Treat it as an annual and collect seeds to replant. It is one of my favourite wildflowers so I wrote this ode to celebrate it!

In comely clusters near the upland path,

And five fine stamens, which extend

Like pins from a pin pad, hoping to attract

The zealot bees who hover round.

The quiet Scot. He clambered from Port Phillip shore

A Linnaean exercise in scholarly power

Enhancing the complex beauty of the flower.

oblanceolate : like a lance, with narrow end at base of leaf

bract: modified leaf at base of flower stalk